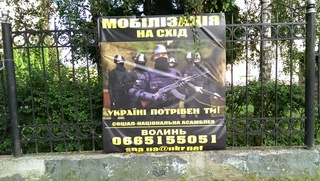 It was with more than a little trepidation that I crossed into Ukraine. The terrible conflict in the East of the country is the prevailing image of Ukraine today, but Andriy, my guide in Ukraine, reassured me that the West of Ukraine was calm. And so it is. We would be starting the ride from Dolsk near the Belarussian border, over 1,000 km from the war zone. When I cross into Romania in August, we will still be over 1,000 from Kharkov and Slavyansk.

It is haymaking time in Western Ukraine, and the golden fields are full of men, women and children turning the hay in the sun and loading up their hay carts for their plump horses to trot back to wooden barns. Trees line the side of the road heavy with apricots and plums. Storks flap lazily in the blue sky.

But there is a sadness to these days. Conscription has started and men from 18 to 45 are being called up to be sent over to support the war effort. Locals talk of conscripts enduring very poor conditions even before they are sent (sleep-deprived, poorly-trained and hungry) to fight the separatists in the East. The conscription net is tightening, catching brothers, cousins, fathers and sons.

Locals tell of refugees coming to the area in dribs and drabs, settled in by friends and family (Baptists welcoming Baptists and so on). All are welcome, other than grown men, because locals want these men to stay in the East and defend their own homes, so that the fathers, brothers and sons of Western Ukraine don't have to do it for them.

Another sore point is the war tax. Locals tell of rumours of racketeers making large sums out of supplying petrol, food and other basics to the Ukrainian army.

The churches are full - smells, bells and songs fill the air. Old ladies outside collect for the war effort. Posters advertise for conscripts, juxtaposed next to ones showing fallen comrades in happier, carefree days.

People are very hospitable and kind, everyone is calm and deliberate.