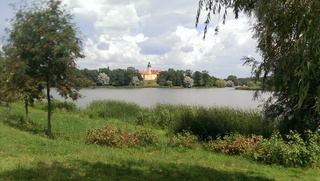 As we move further into what was for many centuries Cathlic Poland/Lithuania, the speech of the locals becomes more difficult to understand as they use Belarussian, a mixture of Russian and Belarussian, and not infrequently, Polish. A number of locals have asked me if I am Polish and then proceeded to proudly talk about their Polish roots and with names such as Casimir Alexandrovich, these roots are quite near the surface.

The fortress of Mir and the castle of Njasvizh owe a huge amount of their history to the Radziwill family, which effectively formed a state within a state (Poland/Lithuania) until 1939 when old Europe, already battered by the first world war was carved up. Under the Molotov-Ribbentrop Pact, Eastern Poland became the Western Soviet Union and 500 years of Radziwill power in this part of the world (according to Wikipedia, they owned 23 castles, over 2,000 estates and over 10,000 villages at one stage) was reduced to a Radziwill princess, kept as a living museum piece at Njasvizh Castle, until she was allowed to escape to Rome at the request of her cousin, the Queen of Italy.

Njasvizh and Mir are two of only four UNESCO sites in Belarus. Njasvizh castle looks and feels very European, not least because it was modelled in the 16th century by Italian architect, Bernadoni. The Radziwills still maintain a strong link with the region, some members have been recently buried at Njasvizh recently. There are currently 72 sarcophagaie in the crypt, which is cool and well looked after, but certainly a place not to stray far from the guide. The place is riddled with legends (a recurring theme in Eastern Europe), including the ghost of the Black Dame (Barabara Radziwill, Queen of Poland) who is said to pace the corridors of the castle, the dark owl that foretells the death of members of the family and yet more tales of hidden treasure and dungeons so large that parts of them remain unopened.

Locals remember the family with fondness, and continue to serve in the castle as their forefathers did before then. Now working in cafes, restaurants and ticket offices for tourists, rather than working for the Radziwill family directly. They are looking forward to celebrating the 100th birthday of a Radziwill from Warsaw in 4 years time.