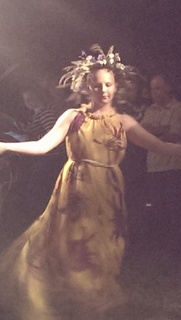 So the warm days are settling in, the cool early morning rides through meadows to avoid to avoid the heat of the day also continue. Friends join for a few days riding and friends of friends are providing dinners of stewed pork knuckle, roasted meat and potatoes, evenings in the banya with cool ponds to jump into. The early morning dew continues to get lighter and yet by midnight, the crescent moon reveals a spreading summer mist that covers the fields.

After an afternoon visit to a ruined estate, which is in the process of being restored by a Belarussian repat, who has come home with the enthusiasm and money to restore the family estate, we again came across the
museum keeper from the family estate in a Catholic village where we planned to spend the night. The area we are riding through was Poland until 1939, so Orthodoxy is replaced by Catholicism and crosses welcome us to every village. Antonina Nikoleavna invited us to join the evening celebration of Ivana Kupala (Kupala night).

Kupala night is the Slavic celebration of mid-summer. A night of mystery and magic as local girls, with their flowery headresses, search for future husbands, either by looking for flowering ferns in the woods, by throwing their flowery garlands into the rivers and seeing reflections of their future husbands and by jumping naked over bonfires. A kind of multilayered, failsafe approach. Swimming at the end of the evening (dawn really) is compulsory and according to one local maid with a twinkle in her eye, must be done naked. Clearly, another failsafe mechanism!

Local Catholics over the years have tried to turn this into a feast day of John The Baptist, but it seemed to me that the Pagan, folkloric side of this summer festival was the prevailing one, although the ghost of Delilah was to be seen from time to time.

As night fell, locals gathered to the sound of a drum, guitar and the discordant harmonies of the band, which was clad in white peasant attire. Some dressed in traditional Kupala costume, some in jeans and t-shirts. Antonina Nikoleavna was the Pagan High Priestess of ceremonies, ushering in with a wave of her hand and a smile, garlanded girls to sing and dance (folksongs and linen mingled with silk waves and Celine Dionne's Titanic). Brawny villagers, many of whom had the stare indicative of too much vodka, competed in contests of strength and to hunt for hidden treasure (more beer and vodka).

As the midsummer mists were starting to cast a chill on all, three large bonfires with "guys" were lit and suddenly, we were all dancing hand in hand around the blazes, which threw out a welcome warmth and whose vigorous flames lit up the night sky, spitting and crackling and sending up sparks and smoke into the moonlit sky.

As the flames subsided, alliances formed to hunt for the flowering ferns in the surrounding flower meadows and copses, splashes and shouts resounded all around as locals threw themselves into the waters of the lake. Some sat, transfixed by the fires and the summer mists carpeted the surroundings, leaving me again to wonder why people in this part of the world called England "Misty Albion".