The road to Smolensk 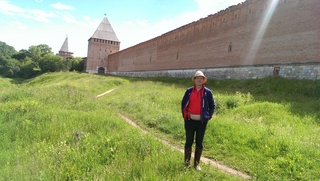 The old Smolensk Road is dotted with black and white striped sign-posts commemorating battles with Napoleon's Grande Armee from 1812 and, with more recent silver-painted war memorials, commemorating those who fought against the Germans during the Great Patriotic War (which is what the Russians call the Second World War). Particularly moving are the monuments to the childrens' armies.

For such an historic road, along which invading and retreating armies have marched over centuries, the old Smolensk road is quiet, harbouring no welcoming cafes or such like for visiting tourists. Local shops all sell pretty much the same things, cheese, sausage, bread, vodka (many different varieties), beer, chocolate, biscuits, and ice-cream. Quite a few of the shops were Coca Cola-free zones.

On the approach to Smolensk, our camp for the night was to be next to a strawberry and raspberry farm, owned by Alexey, who was happy to offer us a field next to a lake, full of rich grass for the horses. Alexey mentioned that he'd be happy to sell us strawberries and raspberries for about 3 pounds per half kilo. As it happens, Andrey the groom, had already discovered the raspberry fields as we approached the camp, but from that point onwards, we were all on our best behaviour.

The June temperatures had been falling steadily since the sweltering heat of the first week and we must have looked rather frozen in the morning when we went to buy strawberries and raspberries from Alexey, and he insisted on presenting us with bright red fruits, freshly gathered that morning by his peasants, who were bent double in the fields, warmly wrapped in colourful headscarves and long woven skirts.

Extremely grateful for such kindness, we gave Alexey a ride on one of the horses before riding on to Smolensk.

As we rode along, locals twitched curtains to watch us pass and a number of them came up to talk. They generally expressed an overwhelming nostalgia for the days of the Collective Farm, when horses passed frequently along this road and generally, there was order in the countryside, as opposed to the general climate of rural decay as nature reclaims its territory and the young who can, flee for the cities.

Smolensk, although a backwater itself for several hundred years, gleams magnificently as one approaches it. The Uspensky (Assumption) Cathedral is the shining beacon of the city and the Cathedral territory houses various smaller churches, where we were to find a choir busy practising for an upcoming concert, and the ubiquitous "lavki" selling ikons, books, candles and blessed red wine. The Cathedral itself, which meets you inside with with a brilliant gold iconistas, was ablaze with candles and numerous Orthodox clergy dressed in blue, green and black pacing around, with swinging incense burners and celebrating evening prayer.

Despite its strategic position, not far from one of Russia's main gateways to the West, the town centre, although clean and generally orderly, feels distinctly provincial. Smolensk's sleepy atmosphere today hides the fact that over 90 per cent. of the town was destroyed during the second world war. As Smolensk was liberated, the celebrated Ikon "Our Lady of Smolensk" disappeared and has never been recovered. This recent conflict added to a whole catalogue of wars as the city was fought over for centuries by Russia, Lithuania and Poland. The remaining 16 monumental towers of the Kremlin (one of the biggest in Russia, it originally had 38 towers) stand as a testament to Smolensk's turbulent history. Nowadays one can climb the giddy heights of the Kremlin towers and take in the superb view of the skyline, while dodging the litter of beer-bottles, burnt-out fires, cigarette packets and debris relating to intimate nighttime trysts.

Monument to the children's army.jpg