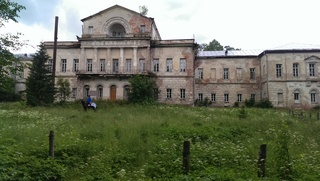 Riding through the largely rural Smolensk region (three times the size of Wales and a population of under one million), it is not entirely unexpected that we should come across a ruined country estate.

Aleksino, the monumental former home of the Baryshnikovs, has the air of Miss Havisham's Satis house. The orchards are overgrown, the once well-tended formal gardens are full of weeds and the great house is slowly unbuilding itself as the plaster falls from the bricks. Building started 2 years before Napoleon's invasion, namely in 1810, on the basis of designs by neoclassicists Domenico Gilardi and Matvey Feodorovich Kazakov.

After almost a century of neglect, the ensemble of lakes, chaples, grandiose stables, bakeries and the orchard still has an integrity, although one cannot help thinking of the girl who pricked her finger and fell asleep for a hundred years when you walk through the park and ruined estate buildings. The collective farm that replaced the country estate as the main work provider in the village has gone. Now villagers put their efforts into tending their peasant cottages and gardens, brimming with bright orange lilies, pink dog roses, onions, potatoes, old apple trees, bee-hives, hens, snappy dogs and rotting bicycles, cars, fridges and step-ladders. The locals are friendly and ready to divulge the secrets of Aleksino.

According to local legend, while after the revolution, the Baryshnikov family "entrusted" many valuables (including paintings and its extensive archive) to the authorities in Moscow and Smolensk, locals believe that the Baryshnikovs buried gold and silver in a tunnel that leads from the ruined chapel under the lake to the hay-barns beyond. It might have been that the Baryshnikovs believed that the revolution would be over in a few years and they'd be able to return afterwards. As the evening wore on, some of the locals were keen to take us on an excursion into the tunnel under the lake to look for treasure, but with the full moon and June fog rising and speech of the locals becoming increasingly slurred and their pace unsteady, none of us had the appetite to stray far from our camp at the lakeside for such nocturnal peregrinations.

Locals also believe that the Aleksino estate was spared from the German bombs during the "Great Patriotic War" due to an agreement between the Baryshnikovs and the Germans. An agreement that involved the return of the estate to its previous owners. In any event, there was clearly heavy fighting in the environs of Aleksino as the local war memorial is full of countless names of the fallen from 1943.

With the lake being full of fish, Slava and Yulia decided to make a "Ukha". Cooked in a steel bucket over the campfire with secret ingredients of a very large slug (it looked like half a bottle to me) of vodka and a burning log from the fire plunged into the bucket for the dramatic finishing flourish, this was a very welcome meal given that the June evenings are quite cool at the moment.

Friday the Dog found a new playmate at Aleksino and we are now wondering whether she will be joined by Saturday, Sunday and Monday in a few month's time.