A visitation, the birthday of Viazma and a celebration of Alexander Griboedov 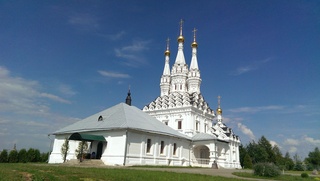 Sunday was always going to be a rest day, and with Jeff and Ira, Louis and Beyonce (two frisky Jack Russells) coming to visit for Saturday night, we rose at 6 and set off in the cool of the day. It soon heated up to 30 degrees and we rode through countryside that is increasingly sparsely populated, stopping to give children a ride on the horses and to buy ice-cream, kvas (a fermented bread-drink) and the occasional twix from the local shops.

Much of the area was have been riding through used to be productive collective farmland, but it now a kind of wilderness full of fields of lupins, cow parsley, meadow-sweet and stinging nettles. The land is very boggy in parts and some of the riding has been tough with bogs trying to suck us down deep into their depths. Friday the Dog is well suited to such terrain and is proving herself to be very adept at herding us and the horses through the safest paths. The muddy ground is covered with Elk tracks and you can ride for hours without seeing a soul.

The "locals" are becoming increasingly friendly, a typical example, being Vera Nikitina, who today invited us to join her for freshly ground coffee from her recent trip to Florence, fried fish and freshly-baked bread. This was a very welcome break and actually Vera Nikitina is a Muscovite who used to work for a TV channel, hence her trips to Florence and Vienna for coffee. Some of the real locals look at us with suspicion from under their headscarfs and sun-baked faced as we ride past, or ask for directions.

Back to the visitation. Jeff, Ira and the puppies appeared late on Saturday night, looking very Moscow in a swish air-conditioned audi, which had kept the champagne and coca cola at perfect temperature. In celebration of such distinguished guests, we dug out one of the remaining tins of foie gras and treated the guests to a ride on the horse (Ira's long silk skirt being material that none of the horses have been used to for a long time). We also treated the guests to a swim in the pool (aka small lake complete with lilies, slippery sides and the occasional rock that you initially think might be a crocodile). Louis the puppy fell in love with Dog Friday and caused havoc until the storm forced him to retreat to the Muscovite camp.

The night's entertainment was the "son and lumiere" of a seemingly far away storm, which provided a dramatic backdrop, until the wind rose up, the temperature dropped about 10 degrees in what seemed like seconds and large warm raindrops started coming down by the bucketload.

In the morning, the sky was innocently blue, punctuated by fluffy cotton-wool clouds with no sign of the last night's theatre.

Viazma was our destination for lunch and as it happened to be celebrating "Den Goroda" (the town's birthday party), this proved to be an excellent choice. Although Viazma has lost many churches over the years due to politics and to its location on the main drive from the West for attacking armies, the churches and the monastery that remain are outstandingly beautiful. The Orthodox faith was celebrating Trinity Sunday and so the churches all looked very festive with branches of Silver birch around their doors, arches, alcoves and icons.

As for the "Den Goroda" celebrations, it felt as if the town was celebrating a village fete on a grand scale. Children were trying to win prizes, eating ice-cream in enormous quantities and riding on camels and ponies around the main square where a statue of Lenin faces one of the town's main churches. Policemen and soldiers were marching around eating ice-cream and smoking while keeping the peace, and men and women listened and danced to the rock group from Smolensk, who were dressed in national costume and singing "Let's go Russia".

This evening we had a very unexpected treat as we arrived at the family home of the long-dead famous Russian writer, playwright, poet, and diplomat, Alexander Sergeevich Griboedov. This beautiful mansion has been restored thanks to Viktor Kulikov (the director of the museum) and we happened upon a party to celebrate the achievement of restoring a mansion to its former glory and Viktor Kulikov's 70th birthday. The very distinguished guests from museums all over Russia were gathered in the elegant ball room and a feast of Russian delicacies (caviar, smoked meats, fish, Russian salad, vodka, cherry juice and whisky) was just drawing to a close. With the best of the Russian hospitality, we were treated to a guided tour of the museum in English by Viktor's grandson (also Viktor) and we joined the feast.

I have put Alexander Griboodev on my reading list. It seems that in addition to his literary works, Alexander Sergeevich Griboedov led a fascinating life until he was sent to Persia as Minister Plenitpotentiary and was decapitated by a kebab seller who displayed his head at his stall after Alexander Sergeevich had given asylum to an Armenian Eunoch and two Georgian ladies.