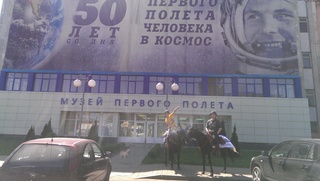 Having ridden about 30 km in the baking Russian sun from Moscow oblast into Smolensk oblast, Slava and I toured Gagarin while Andrey pitched the tents for the night in a field outside Gagarin. Gagarin was known as Gzhatsk until 1968 when it was renamed after Yuri Gagarin, who was born in the outlying village of Klushino. For foreigners, the town is a good example of what life felt like during the Soviet Union. Shops are very simple, there is a Komsomol (Communist Youth Movement) building, a simple hotel and a very beautiful church on the banks of the river Gzhat that is still partly used as the regional museum. Nearer to Moscow, many churches have already been restored to their original use.

The town has a population of 30,000 and almost everything has a Yuri Gagarin/Cosmos theme, from the local cinema to numerous shops. On Lenin Street, which leads to the main square there are old wooden houses decorated in traditional Russian style, and some of them have little red stars carved into the fretwork. Locals are laid-back and the shops are full of products from Belarussia. We found some old sign posts showing distances measured in "Versts" (60 to Moscow and 223 to Smolensk).

After dinner, when we were tidying up the camp, the horses started and then stood aggressively like sentinels looking into the evening mist at some unseen foe! They started whinnying aggressively and out of the mist came a large and curious Elk. My horse, in particular, started marching back and forth in a kind of stand-off with the Elk, which looked to us pretty harmless. As soon as the Elk spotted us, it trotted quickly away into the mists, leaving the horses and us to relax in the cool of the evening!

We have been thoroughly spoiled so far along the route with friends visiting from Moscow, bringing victuals that are not readily available locally. More friends are visiting tonight and on the weekend. Storms are forecast for Moscow, but the weather forecast for Viazma (about 60 km from here), which is where we are heading looks fine.